More than 100 girls from sixth forms across North Wales were at the Catrin Finch Centre on 2 October for the second annual Girls Make a Difference conference.

Organised by the Welsh Government’s Fairer Futures Division, the event is aimed at raising girls’ aspirations and demonstrating that careers in less traditional roles – such as science, engineering and as decision-makers in public service – are accessible to all.

Roundtable discussions and workshops led by organisations such as Chwarae Teg, Techniquest Glyndŵr and the Welsh Government, focussed on the issues facing women in the workplace and featured contributions from inspirational role models from across Wales.

Pippa, who is also Chair of Disability Support Wales, said: “I’ve been asked to come and talk to some amazing young women, who I think are all going to have incredibly bright careers and bright futures. It’s about inspiring them to be the best that they can be.”

Lesley Griffiths said: “The achievements of the women at today's event show us no job is off limits to women and girls.

"However, it is important to hear about the obstacles successful women have faced along the way.

"We must acknowledge and address these barriers if we are to stop women from being shut out of certain careers and under-represented in many of our better-paid jobs."

This was the first time that the conference has taken place in North Wales, and Glyndŵr University were delighted to host and be involved. 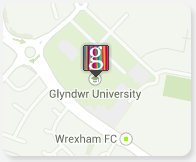